The digital revolution and the practice of history: what’s changed and what hasn’t changed? This was the question posed by Dr Tim Sherratt in his keynote address at the History teachers Association/Macquarie Uni Headstart to Extension seminar this week.

Sherratt describes himself as a historian and hacker who researches the possibilities and politics of digital cultural collections. As well as an academic post at the University of Canberra, he’s currently half of the Trove management team at the National Library of Australia.  My favourite line from his keynote was that he wants “to mobilise our cultural collections into the spaces people already inhabit.” That is, I think, what public history is all about.

The study of the past has already been transformed by digital technology: Trove’s 190,000,000 newspaper articles is just one example of this. But Sherratt demonstrated that digital technology means more for the practice of history than ‘simply’ digitising documents. Through the course of his keynote, Sherratt demonstrated a number of digital tools which can help historians think about and analyse primary sources in different ways; and he showcased a number of projects which utilise digital technology to help us see people, places and events in the past in a new way.

But back to the question—what’s changed and what hasn’t changed? We must continue to be sceptical of our sources. Just as students of history are trained to think about the assumptions and forces which shaped individual primary sources, so we must also think about the assumptions and forces which shape digital collections. Funding priorities, significant anniversaries and curatorial agendas are just some of the forces which dictate which documents are digitised, and how the collection is presented. For example, Trove (which draws from other digitised collections around Australia) returns significantly more digitised newspaper articles for 1914. This is the result of the priorities of the state libraries around Australia, which have focused on providing sources in relation to World War I during the current 100 year anniversary.

Understanding the forces and assumptions that drive the creation of digital collections should in turn lead the historian to consider the age-old questions of what isn’t there, just as much as what is. Absence is just as important as presence when considering an archive. As Sherratt noted, it’s important to guard against the “sense of completeness” in the digital age. Just because something isn’t in google, does it mean it doesn’t exist? 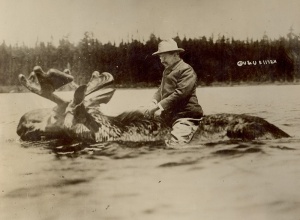 I can’t take credit for discovering the Roosevelt on a moose picture. Refer to Dr Sherratt’s slides for more on this.

Sherratt also drew attention to the presence of fake and unattributed historical pictures which seem ubiquitous online. But the well-known fake picture of Teddy Roosevelt riding a moose was actually created in 1912. New technology may make it easier to share fakes, but as Sherratt pointed out, this technology also makes it easier to learn about—and from—those fakes. For example, @picpedant tweets attributions and calls out fakes, and digital tools such as Tin Eye enable anyone to analyse whether an image has been doctored. The fake historical pictures may drive pedants mad, but they do generate discussion.

The slides from the keynote are available online here and include links to many exciting digital history projects, and the tools I’ve mentioned in this post.

I’m really excited about the possibilities for accessing and analysing sources, and communicating historical findings, which digital technology is bringing to the practice of history. Much of the audience at the keynote yesterday was students in their final year at school. My hope is that Sherratt inspired some of them with the desire to see where technology can take their historical practice in the future—in Sherratt’s words, “the possibility of small revolutions.”