I completed my PhD thesis, 'Irish Lives in the British Caribbean,' in 2018 at Macquarie University. I researched the lives of ten Irish settlers and sojourners in the Caribbean during the Revolutionary era to examine the Irish experience of empire—uncovering stories of slave traders, abolitionists, missionaries, planters and soldiers. My findings spanned Irish history, British imperial history and the history of the Caribbean and i'm still working out the best way to share my research. My Masters thesis also examined an aspect of eigtheenth-century Irish history—the reception in England and Ireland of news of an imperial naval victory—and was published in a special edition on Transnational Ireland in the Irish studies journal Éire-Ireland. I maintains two blogs dedicated to my passion for history, one a personal site https://modhistorymusings.com and the other shares research and resources which illuminate the history of the Caribbean: https://caribbeanhistories.com

by Nick Draper On Wednesday 8th May, I gave a presentation on ‘Slavery and Britain’s Infrastructure’ to staff at the National Infrastructure Commission’s secretariat in Holborn. The NIC was established in 2017 as an executive agency of HM Treasury with a charter to provide advice and make independent recommendations to government on national infrastructure priorities, […]

via Slavery and Britain’s infrastructure — Legacies of British Slave-ownership

A couple of years ago I started a blog that I called ‘Caribbean Histories: Resources for learning about the Caribbean past,’ with the aim of sharing some of the amazing digital resources out there dedicated to Caribbean history. I also shared links to digital projects and collections, to exhibitions, academic research projects, books and audio content.

I’ve had a consistent core of visitors to the Caribbean Histories site, but have decided to collapse that blog into this blog.  I’ve migrated all posts from the old blog over here and I’ll still share links to new Caribbean content – just look under ‘Caribbean History Resources‘ on the main menu for this site.

As always – please get in touch if you have any comments, want some direction with your research or if there’s something that I shared that helped you out.

The Musée d’Orsay in Paris has just opened an exhibition entitled ‘Le modèle noir De Géricault à Matisse,’ which attempts to restore the identities and perspectives of black figures depicted on canvas but largely written out of history. This article from the Washington Post focuses on one artwork in the exhibition. The painting by Marie-Guillemine Benoist has hung in the Louvre for decades under the title ‘Portrait of a black woman.’ In the new exhibition, the subject of the painting is named – it is entitled ‘Portrait of Madeleine’ because it is a portrait of an emancipated, formerly enslaved woman from Guadeloupe who worked in the home of the artist’s brother-in-law.  The exhibition addresses France’s role in the slave trade and the manifestation of the debate over slavery in the arts of the period. 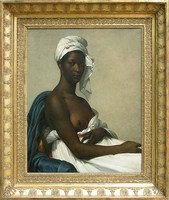 In December 2018, the British Library completed the digitisation of The Barbados Mercury Gazette, funded through the endangered archives project. The digitisation team have previously written about different stages of the project; in this post the team divulge some more about the process of digitising this vital piece of Barbadian history.

The Mercury is a fantastic resource for exploring everyday life in eighteenth and nineteenth century Barbados – each issue is about 4 pages long and is replete with advertisements for consumer goods and real estate; runaway slave advertisements; shipping news; reports of community meetings and social events, and news cut-and-pasted from around the Atlantic world. To access the database, follow this link: Link to the Barbados Mercury online

I’m very pleased that my most recent research on manumission in late-eighteenth century Jamaica has been published in the New West Indian Guide, the oldest scholarly journal with a focus on the Caribbean.

Manumission (the liberation of individual slaves) took place in many slave societies throughout history for a variety of reasons.  In this article, I use over 300 manumission deeds from Jamaica to explore the rationale for freedom grants, demography of the manumitted population, characteristics of the manumitters, and prices paid for freedom, when cash was exchanged.  In Jamaica, the proportion of slaves who were manumitted was very small, but one has to keep in mind that the entire population of bondsmen and women was very large on the island.  Nonetheless, manumission occurred on a regular basis and had…

The New South Wales government has given Dr Cameron and the project a $66,290 Arts and Cultural grant through ‘Create NSW.’ The grant will be used to produce a collection of fifty new biographical essays for the St. John’s Cemetery Project (SJCP) website on “Notable Parramattans” buried at St. John’s Cemetery in Parramatta: Australia’s oldest surviving European cemetery (est. 1790).

I’m delighted to be a part of this project. I will be contributing a biography of the Irish-born matron of the Parramatta Female Factory. Watch my blog, and the St. John’s Cemetery Project site for updates.  Particular congratulations to Dr Cameron for her work in obtaining a grant and gathering a team of historians to bring this early colonial history back to ‘life!’

Free Communities of Color in the Revolutionary Caribbean

Free Communities of Color in the Revolutionary Caribbean
— Read on ageofrevolutions.com/2018/10/22/free-communities-of-color-in-the-revolutionary-caribbean/

Randy M. Browne is a historian of slavery and colonialism in the Atlantic world, especially the Caribbean. He is an Associate Professor of History at Xaverian University (Cincinnati). Surviving Slavery in the British Caribbean is his first book and he discusses it here with Jessica Parr.

via Q&A with Randy M. Browne, author of Surviving Slavery in the British Caribbean — The Junto

Fierce Girls is a podcast aimed at primary school girls, produced by ABC Radio in Australia. Each episode narrates the story of an Australian girl or woman—some historical figures, some in the recent past—who has somehow pushed beyond boundaries and achieved more than was expected of her.

The episodes are narrated by well-known Australian women, and include sound effects and some voice actors playing the role of the protagonist. This is at times a bit grating to the adult ear, but the variety of voices seems to keep children interested and propels the narrative along.

The standout episodes for me have been the historical ones—about World War II spy Nancy Wake, pilot Nancy Bird-Walton and ground-breaking Olympic swimmers Fanny Durack and Mina Wylie. Episodes about more recent events include Jessica Watson’s solo sailing voyage around the world and Cathy Freeman’s (brilliant!) run at the 2000 Olympics in Sydney. I’ve mentioned a number of sportswomen and girls here, but Series 1 also covered social activists, indigenous women and women in education and the arts.

I recommend the podcast for children and adults—and I would say it is certainly not just for girls. The themes and issues raised (subtly) are universal. Children can spot a ‘moral of the story’ a mile away. For the most part, this podcast manages to tell great stories in an engaging way, raise some questions, and provide good fodder for discussion afterwards. Australian boys deserve to know about the exploits of these fierce girls just as much as Australian girls do.* We’re all in this together!

Series 2 is currently in production.

*Also no reason why this podcast wouldn’t translate internationally.