One of my writing projects this year has been a biography of Sarah Bell, an Irish immigrant to colonial New South Wales who worked as the Matron of the Parramatta Female Factory between 1836 and 1843. My biography forms part of the St John’s Cemetery Project, an online database for Australia’s oldest surviving European cemetery. 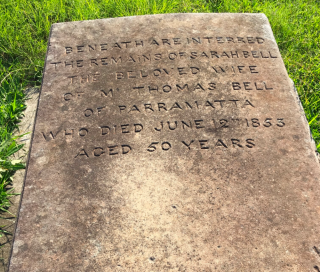 Researching the lives of women in the past is challenging. During her tenure at the Factory, Sarah was a visible presence in the archives. As Matron, she was one of only a small number of women in the early colony of New South Wales with an official government role and salary.[1] I managed to track her time at the Factory from government records and newspaper articles without too much trouble. Most of these documents (some press reports aside) were dry and functional—useful for piecing together details but revealing little about Sarah as an individual. One document was different however. In August 1843, Sarah felt compelled to write to the Factory’s supervising magistrate, describing the ‘outrageous and extraordinary conduct’ (her words) of the sub-matron at the Factory, and the effect this was having on her and her family. If you read my biography you’ll see that this letter was no dry work of officialdom.

Sarah’s early years and her life after the Factory were far more difficult to uncover. Genealogical details were hard to come by, although fortunately her death notice in the Sydney Morning Herald revealed the name of her father and where in Ireland he was from. I am very grateful to Sue Bell (one of Sarah’s descendants) for her research on Sarah’s origins. Sue published a fascinating blogpost about her quest to find Sarah’s birthplace in County Galway, Ireland.

In order to reconstruct the kind of life Sarah and her family led in the early colony, I followed Professor Noeline Kyle’s advice and searched for traces of the men around Sarah—it was often the men who were named in official documents or newspaper reports.  I investigated the career of her husband Thomas at various government posts in Sydney, some of which came with living quarters for the family. Thomas’ legal travails were frequent fodder for the colonial press. Then I followed the trace of Sarah’s eldest son Joshua (later Sir Joshua), who was a long-serving member of the Queensland parliament.  I even found a reference to Sarah’s daughter (Mary)’s fiancée in newspaper articles. Sadly he perished on board the Sovereign in 1847.  Precious little of this research mentioned Sarah by name, but it all helped me to build a picture of her family’s life: where and how they lived; how their children were educated and cared for; the ins and outs of their work at the Factory; even the sadness of comforting a bereaved adult daughter.

Historians use biography to illuminate the past and to learn something new about the world our biographical subjects inhabited. This requires both a focus on the micro, or the individual life, but also on the context in which they lived. As Andy Wood has argued, the intensive nature of case studies (such as the St John’s biographies) often produces ‘fresh archival finds in which moments of contestation, embarrassment, anger and inversion…reveal something of wider social structures, sensibilities and understandings.'[2]   In constructing my biography of Sarah, I paired this focus on archival sources with an exploration of the spaces and places she and her family inhabited. The geopolitics of 1820s Ireland and colonial Sydney were the backdrops against which they lived their lives. But we learn a lot about Sarah and her world by zooming into the spaces her family moved through – workplaces at the Lumber Yards, Carters’ Barracks and the Factory; Joshua’s schoolrooms at Sydney College and the King’s School; the courtrooms of Parramatta and Sydney; and even the streets between the Factory and the children’s daycare.

The details inscribed on Sarah’s tombstone at St John’s Cemetery are sparse. But by combining archival research on Sarah and the men around her with research into the spaces and places they inhabited, I managed to uncover far more about Sarah—and colonial Sydney and Parramatta—than I expected.

This site uses Akismet to reduce spam. Learn how your comment data is processed.